Want to have control over your oral health?

How does gum recession progress over time? 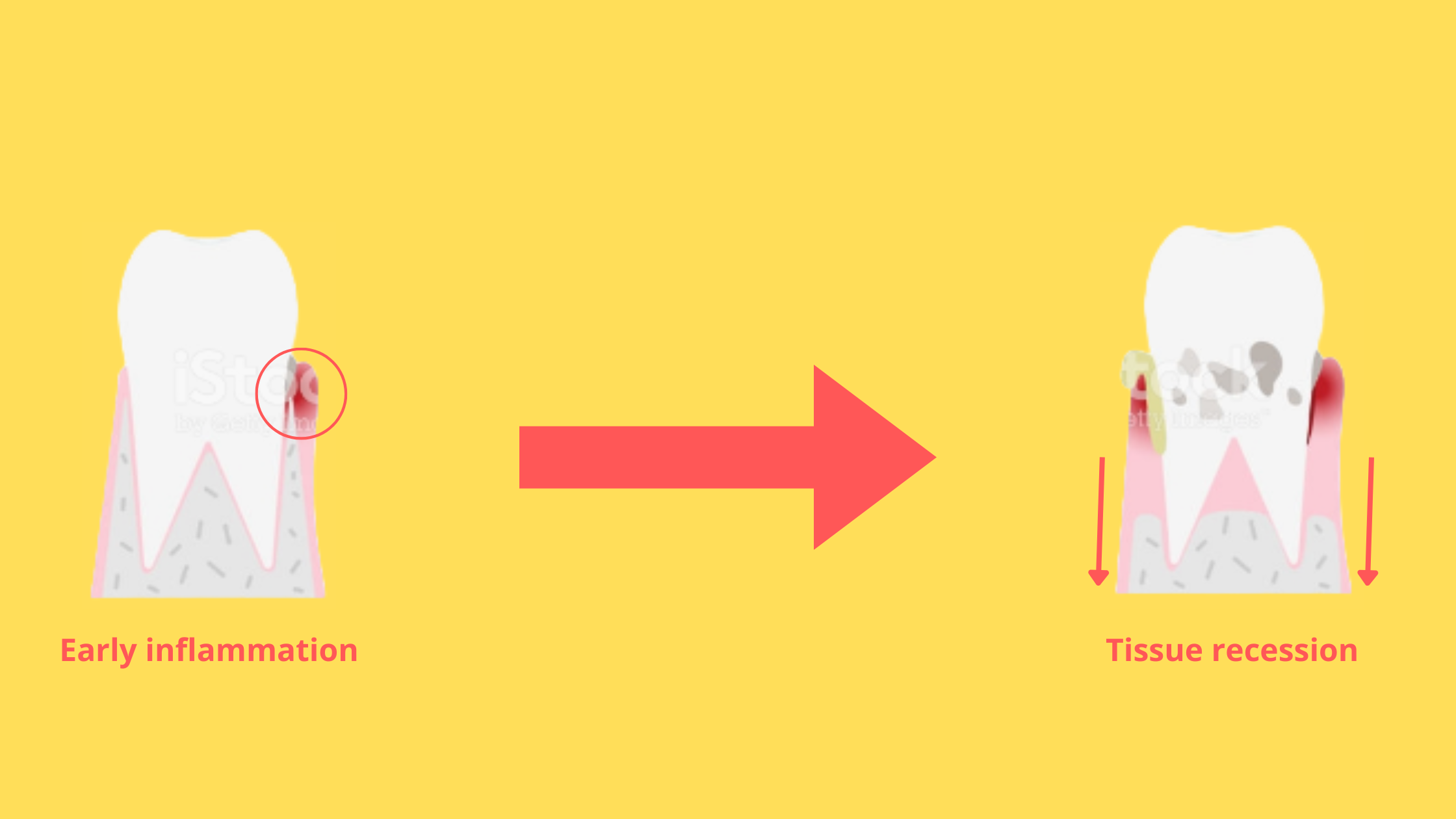 Gingival recession is a common condition. More than 50% of the population has at least one site with gum recession.
If left untreated, it gradually progresses, leading to loosening and loss of teeth.
Find out in this article how recession occurs and its different stages.

What is gum recession?

Gum recession is a condition where you notice a gradual movement or decrease in the height of your gums. It gives you the impression that your teeth are longer, but it is just a consequence of the change in the position of your gums that now expose part of your roots.

In addition to impacting your smile, the exposure of the roots to the oral environment will result in dental sensitivity. 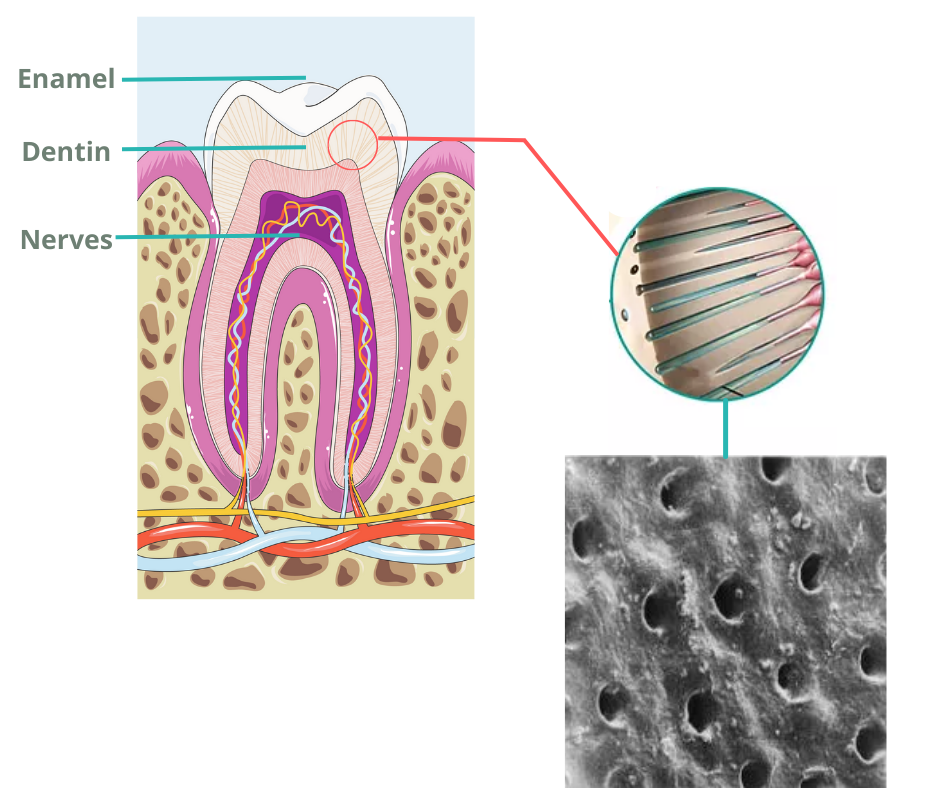 Unlike the crown, the root is not protected by enamel. When the gums recede, they expose the dentin, which contains small canals called tubules. The tubules go through the entire dentin thickness and end at the tooth nerves. Therefore, you may feel pain when you eat hot or cold foods.

Gum recession can also lead to more serious complications such as mobility or tooth loss.

How does gum disease occur?

Many factors can contribute to the appearance of gum recession. However, gum disease (also referred to as periodontitis) and trauma are the two main factors that trigger this problem.

Trauma involves all factors that can injure the gums, such as aggressive tooth brushing, ill-fitting dentures, and piercing.

Gingival recession does not appear overnight but progresses slowly over the years. Thus it occurs often in adults, generally during their forties, and more rarely in young people.

In the presence of a triggering factor, inflammation occurs.
Although intended to protect us against aggressions, the persistence of inflammation will lead to the destruction of gum tissue. As long as the triggering factor is present, the gum will continue to recede, exposing part of the tooth roots.

Other causes are known to increase the risk of recession, among them:
Poor oral hygiene involves inadequate brushing or lack of interdental cleaning, which promotes plaque build-up and the infiltration of bacteria into the gums. This can lead to inflammation and destruction of the tissues that support the teeth, especially the bone and gums.

Using a hard bristle toothbrush or aggressive brushing will injure the gums through repeated rubbing. It can also cause tooth wear resulting in sensitivities.

Similarly, piercings on the tongue or lips, with their repeated rubbing on the mouth tissues, can also cause gum irritation.

The risk of recession is even greater if you have crowded teeth. Poorly positioned teeth will hold more plaque and food debris and be harder to clean, promoting inflammation. In addition, they affect the contour and shape of the gums around the teeth, making them thinner and less resistant in some areas.

Smoking reduces blood flow to the gums and weakens the immune system, which promotes bad bacteria and further tissue damage.

The stages of gum recession

Gingival recession is a condition that progresses over time.

In the presence of virulent bacteria or injury, inflammation causes your tissues to shrink from the top of the gum (the marginal gum) to the roots.

The way recession evolves depends on the factors involved.

Gum recession following an injury due to vigorous brushing or piercing in the absence of periodontal disease is usually limited to one tooth or a small group of teeth. They involve only the gum area in front of the teeth without damaging the interdental gum. The interdental gum is the triangular-shaped tissue that fills the spaces between the teeth.

In this type of recession, complete root coverage can be achieved with a gingival graft technique. The image below shows the stages of trauma-induced recession without treatment. 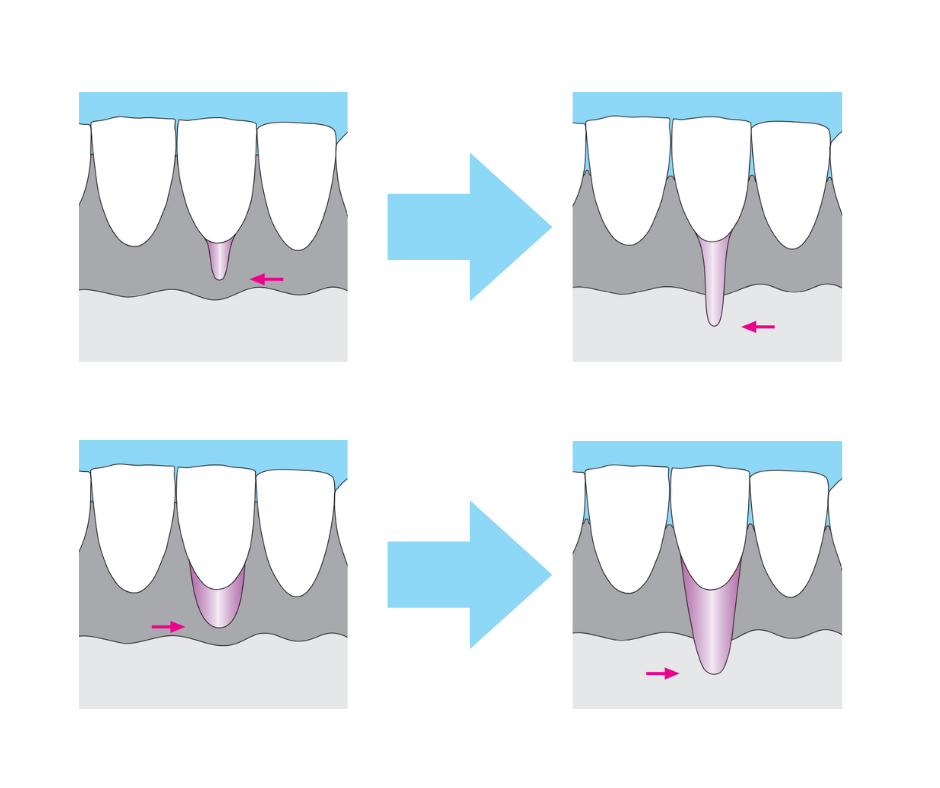 Gum recession is more complicated in the presence of gum disease or periodontitis.

Periodontal disease involves the infiltration of bacteria into the gums, causing inflammation. The resulting reactions will destroy the tissues surrounding the teeth, including the bone, gums, and ligaments that hold the teeth in place.

Recession due to gum disease progresses slowly over many years and often affects several teeth. It involves all the gum tissue surrounding the tooth, including the interdental gum, which causes black triangles to appear between the teeth when you smile.

The bone and ligaments deteriorate as the gums recede, making the teeth looser. If left untreated, tissue destruction continues until the teeth are lost.

Once the gum between the teeth is affected, complete root coverage cannot be achieved due to the loss of tissue that would support the graft.
The picture below shows the progression of gingival recession due to periodontitis. 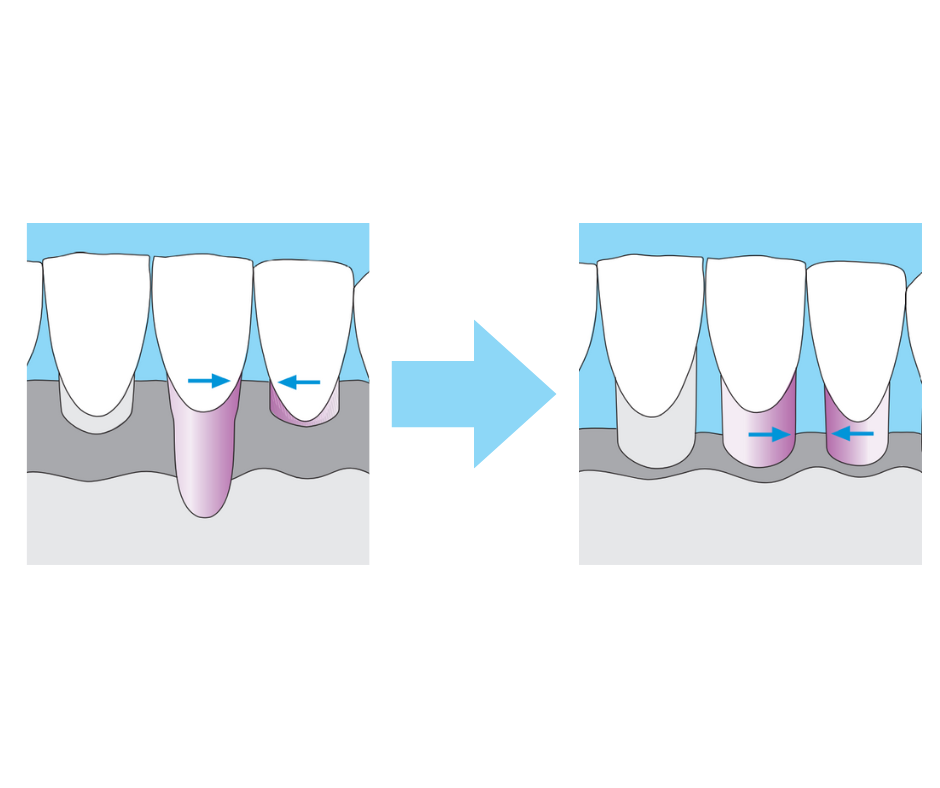