Want to have control over your oral health?

What causes gum recession in one tooth and how to prevent it? 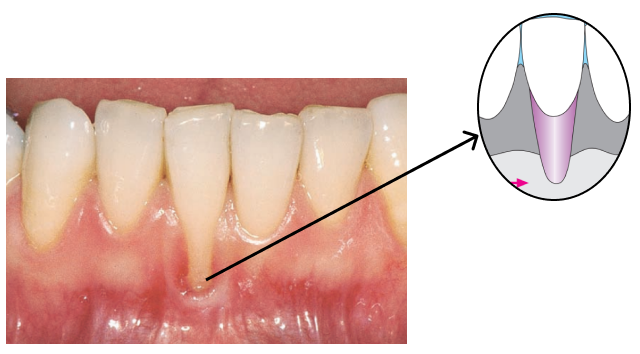 Gingival recession is a common condition that progresses over time if left untreated. It exposes part of the roots, which in addition to causing sensitivity, can make your smile look unpleasant.
Recession can affect most or all of your teeth in its generalized form. But, when you have only one tooth or a small group of teeth with a recession, it is called localized.
Find out in this article more about a recession in a single tooth.

Gum recession is usually the result of multiple factors. The most common cause is plaque buildup. Plaque is a thin, soft, whitish deposit that sticks to your teeth' surface. When you don't brush your teeth, it accumulates. Bacteria will then infiltrate the inside of your gums and trigger inflammation, causing the tissues surrounding your teeth to retract, exposing part of your roots.

Plaque-induced recessions occur in the context of gum disease. It usually affects several teeth, if not all of them. It can also be associated with bone loss, leading to the loosening of the teeth.

However, an isolated recession that occurs on a single tooth is usually the result of a trauma or injury. Other risk factors that will discuss later can also be associated. The people affected by this type of recession often have good oral hygiene and don't present any sign of gum disease (redness, swelling, and bleeding).

In addition, the tissues that hold the tooth in place, including the bone and ligaments, preserve their strength in isolated recessions. Thus, the affected tooth does not loosen and remains firmly anchored in its bone.
However, when plaque and tartar buildup, inflammation (gum disease) can occur, leading to bone shrinkage. You may start noticing that your tooth becomes looser.

The most common causes of a recession in a single tooth

Among the causes that contribute to gum recession on one tooth:


The shape and type of your gums by themselves do not trigger a recession. However, when combined with other factors, they significantly increase the risk.

With triggers, such as gum disease or trauma, people with thin gums are more vulnerable to gum recession. A tooth may also lack bone in an area around its root, which further increases the risk.

Another anatomical feature that can cause recession is the labial frenulum. The labial frenulum is a piece of soft tissue that connects the lips to the gums. It is present at the top and bottom of the mouth.

Sometimes, abnormal insertion of the labial frenulum on the gum can apply excessive tension and cause gum recession.


Aggressive brushing is one of the most common factors of gum recession on a single tooth or a small group of teeth. It frequently occurs in the upper jaw canine due to its prominent position over the other teeth, which causes it to receive more pressure when you brush.
It can also be associated with signs of tooth wear in the area near the gum line.

Recession is more likely to occur if you use a hard-bristled toothbrush or brush with horizontal motions. In addition to irritating your gums, you may cause tooth sensitivity. A piercing can also irritate the gums and cause recession through repeated rubbing.


When plaque builds up on the surface of your gums and teeth, bacteria enter your tissues and trigger inflammation. Although it is supposed to protect us, if it lasts too long, it destroys our tissues, causing gums and bones to recede. If left untreated, the disease continues to progress until it leads to tooth loss.


A large filling or an ill-fitting crown that extends beyond the gum line can also create irritation. This will cause plaque to build up in the area and promote inflammation. The tissues that support the restored tooth will gradually shrink, exposing the root.


Orthodontic treatment is not a direct cause of recession but can predispose or worsen the situation. The forces applied by braces to align teeth can cause a tooth to move out of its bony support.
As a result, the tooth is no longer supported by the bone, and the gums become thinner, which increases the risk of recession.


Dental misalignment not only impacts the position of your teeth, but it also affects the shape of the underlying bone and gums. When a tooth is tilted too far forward, it may not have enough bone support, which can lead to thinning of the gums and increased susceptibility to recession.
Furthermore, a mispositioned tooth can be challenging to clean, resulting in plaque buildup and inflammation. Additionally, a malpositioned tooth can interfere with your bite, leading to excessive forces that can stress and damage the surrounding tissues.

Preventing and treating gum recession on a single tooth

Preventing gum recession starts with improving your oral hygiene practices. Having thin gums does not mean that recession is inevitable. Rather, it is the plaque and continuous irritation that can trigger this problem.

Brush your teeth regularly and gently with a soft bristle toothbrush. When you brush your teeth, avoid horizontal movements as they are more aggressive for your gums.

Don't forget to clean between your teeth because these areas are inaccessible to the toothbrush. Therefore they are an ideal environment for bacterial plaque buildup.

Consider regular visits to your dentist, at least twice a year, even if you don't feel the need. These checkups can sometimes reveal asymptomatic conditions such as early decay or the onset of gum disease. Treatment in their early stages is easier and faster.

If you notice a recession limited to one tooth, chances are it is due to local irritation of your gum. In this case, the gum between the teeth should be healthy. As for the tooth, it must be firmly anchored in its bone support without any mobility. Tooth loosening and loss often indicate gum disease that gradually leads to bone loss.

The treatment of gum recession on a tooth due to trauma consists of a gum graft technique. As long as the gum between the teeth is not affected, complete root coverage is possible.